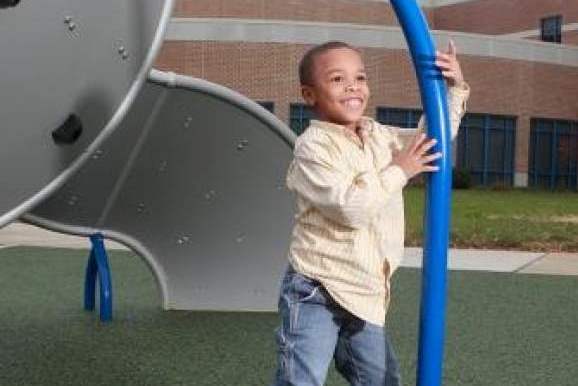 E.M. watched her toddler, C., flick the TV off and on repeatedly. He did the same with the light switches. He’d jump almost nonstop. And he stopped talking and began uttering small sounds instead of the few words he’d been using. Since M. had not observed these behaviors in his three older siblings, she took C. to his pediatrician. The doctor referred her to Baltimore City’s Infants and Toddlers Program (BITP), which then sent her to HASA to test C. for deafness.

“His hearing was okay,” M. recalled. “They gave him speech services twice a week. But his behavior was still a little weird, so I knew it was more than just a speech problem.” HASA’s team concurred and sent a doctor to observe C. at home. The diagnosis: autism spectrum disorder (ASD), which the National Institutes of Health describes as “a range of complex neurodevelopment disorders, characterized by social impairments, communication difficulties, and restricted, repetitive, and stereotyped patterns of behavior.” ASD afflicts three to six children out of every 1,000 in the United States, according to federal statistics, and boys are four times more likely to have it than girls. There is no cure for ASD, but it can be treated through medication and special education – the earlier, the better.

Thanks to his mother’s keen observation skills, C. has benefited mightily from early intervention. M. started the Individual Education Plan process (IEP) with Baltimore City to ensure that her son got into the most appropriate school as soon as he turned 3 (the earliest possible age). And that was how she found Gateway School – housed in the same building as HASA, where he first got help. Gateway is a private school for children with special needs whose primary barrier to development is difficulty communicating. Each student has a team comprised of a special education teacher, speech therapist, occupational therapist, physical therapist, and audiologist. “It’s amazing to see how far C. has come in two years,” M. said. “He can let me know what he wants. He can make eye contact. He’ll even read a book to his 2-year-old brother.”

R.K. was one of C.’s first teachers at Gateway. “Children on the autism spectrum like C. lack skills in pragmatic language – eye contact, reading nonverbal language, understanding what nonverbal language is being used, etc.,” she said. When these children are targeted at the earliest sign of delay in developmental milestones, intensive therapy can give them techniques that eventually become second nature. “Intensive therapy six hours in the school each day helps 3- to 5-year-olds develop socially and gives them the basic skills necessary to function in the classroom,” she added, “such as listening to teachers, staying with a group and paying attention to tasks for longer and longer periods of time.”

This year, C. is in A.D.’s class at Gateway. By using a variety of special education techniques, such as verbal and visual prompting, repetitive and visual directions, small group and individual instruction, Ms. D. is helping her six kindergarten/first-graders reach their highest potential. “Once they have learned basic skills, their language skills tend to improve.” D. and K. stress the urgency of monitoring a child’s developmental growth almost from birth. Parents ultimately must be the first line of defense, since pediatricians typically see children for checkups or emergencies only.

“The Maryland State Department of Education offers milestone charts that provide an age range by which children should have reached particular milestones,” K. said. “If parents notice a significant gap between what their child should be doing at a certain age, and what they can do, then they should call Maryland Child Find [800-535-0182] to have the child evaluated.”

After all of the help and services M. secured for C., she is hopeful now that he will be able to transfer into a regular classroom within two years. “I couldn’t have asked for a better placement for C. than Gateway,” M. said. “If C. had gone to any other school, I don’t think he would be the person he is today. HeÕs been reaching all of his goals. I think he’s going to be my genius child.”