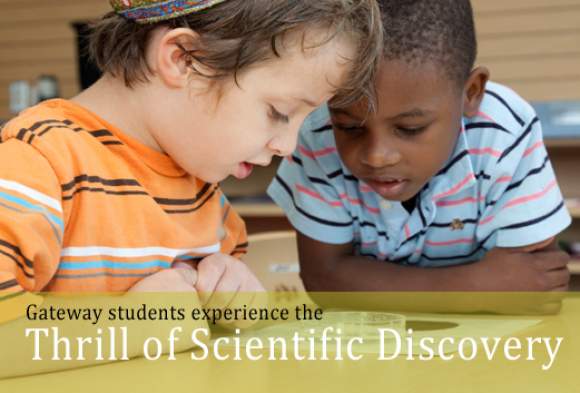 HASA Gateway School was the first nonpublic school in the country to participate in the innovative BioEYES program. The school was full of excitement all week as Gateway teachers and BioEYES team members guided our students as they caught small fish in nets, peered into microscopes and petri dishes, and pointed to illustrations that matched what they saw.

Project BioEYES is a week-long, hands-on science program conducted in partnership with classroom teachers in Philadelphia, Baltimore and South Bend, IN. Designed to inspire young students to get excited about science, the program has thus far reached more than 18,000 students from preschool through 12th grade.

Students work with live zebra fish, observing their eggs and embryos and watching them grow into fish. They learn to talk about what they see and everyone participates, regardless of their skill level or physical limitations. For group discussions (and to accommodate children who cannot look into the microscope), the program uses special adapters that project what is seen through the microscope onto a large video screen in the classroom.

“What is so fascinating about zebra fish,” says S.A., Baltimore Outreach Coordinator for BioEYES, “is that they are 80% genetically similar to humans. Genes responsible for certain functions in zebra fish, for example, can be mapped to genes in humans that perform the very same functions.”

As the week unfolded, the tiny eggs that appeared on Monday, began developing eyes and tails. “The older children usually figure out what they are seeing by about Wednesday,” says A. “But for some of the younger children, the wiggling creatures they see by Friday are completely astounding.”

BioEYES program leaders say they are “impacting future scientists and doctors by educating these young citizens to think critically and scientifically.” And the pre- and post-surveys given to students bear that out. Most students who are ambivalent about science at the beginning of the week develop a clear excitement for science, and confidence in their ability to participate in science, by the end of the week. Children who identify themselves as loving science respond in post-project surveys that they love it even more.

And that’s exactly what happened at Gateway: “The BioEYES project was over last Friday and today [Thursday] the children are still talking about it,” says J.B., Educational Director at Gateway School. “The project was perfect for our students,” she continued. “Every child had a job, so every child had a chance to do real science and that is an idea we can continue to build upon.”

For more information, please visit the BioEYES website at: http://www.bioeyes.org/