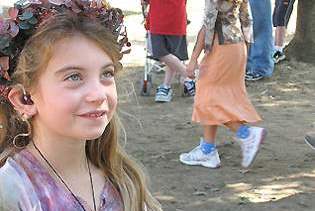 R. is a bright and creative 9-year-old girl who is thriving. As a newborn, she failed her hearing screening twice, then failed her follow-up audiology test two weeks later. By two months, further testing showed that R. was profoundly deaf.

The news was shocking to R.’s parents. Her mother, who comes from a family of musicians, remembers feeling “devastated.” She and her husband tried to find out as much as possible about deafness, treatment for hearing loss, and language development in deaf children. At four months, R. was given hearing aids. She was growing so fast that her parents had to have her fitted with new earmolds every 2 to 3 weeks. Her parents also began to learn American Sign Language. They put R. into speech therapy and began to ask questions about cochlear implants. By the time R. was 18 months old, she had learned 500 signs. Her teacher remarked that she signed as well as a deaf child of deaf parents. R. was creative with her signing and came up with combinations for expressing ideas that proved she was bright and taking well to the language. “We had a perfectly happy, healthy child who was communicating,” explains her mother. The decision about whether or not to risk the invasive surgery required to give their daughter a cochlear implant was extremely difficult, but it was ultimately the right decision for the family. After the surgery, the family enrolled R. at HASA in a therapeutic program targeting speech and language development. In just one summer, R.’s speech-language abilities “took off,” explains her mother. After two years at HASA, R. was ready to succeed in mainstream school. Because of the early intervention that R. received, she is now a vibrant young woman who is proud to share her story.

See R. in our new video: