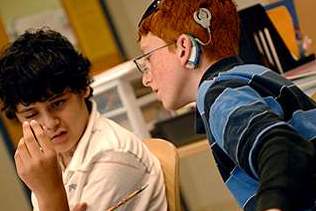 S. and C. are best friends. They met at Gateway School, where they are both thriving. S. came to Gateway when he was 9. Born profoundly deaf, he received a cochlear implant at age 5. By the time he arrived at Gateway, S. had become proficient at American Sign Language, but his speech was very difficult to understand and he needed the services of a sign-language interpreter to understand what was happening in the classroom.

After two years of hard work by his HASA interpreter, his Gateway teachers and, above all, S. himself, S. learned to communicate very well in spoken English. “It’s hard to believe the S. we first met is the talkative and very outgoing young man we see every day now,” says S.’s teacher.

C. was a healthy little boy until the day he was hit by a car in an alley near his home and sustained a traumatic brain injury (TBI). C. was in third grade then. He had a long recovery period in which he had to relearn basic skills such as how to walk and talk. “C. is a pleasure to work with,” says his teaching assistant. “He is very motivated to learn. He’s excellent in math and his communication skills are improving all the time.”

S. and C. motivate each other. They are the “Big Men On Campus” here at Gateway, setting an excellent example for the younger students by asking their teachers for extra homework, often working together through breaks, and keeping well-organized binders for their lesson materials. They can often be seen engaged in fiercely competitive basketball games on opposite teams.

This year, they were given the joint task of running the cash register at the school store. The store is open every Friday and students can “buy” items with the gold coins they earn throughout the week for doing well in school and showing good behavior. S. and C. have taken the responsibility of running the store above and beyond what their teachers expected and they take pride in the operation.

“Every week,” explains his teacher, “S. and C. go around to the different classrooms and draw up a schedule of what class groups will visit the store when. They are careful to be there when the other students are scheduled to show up. But beyond just running the cash register, the boys help the children understand numbers and money. They even give them financial advice! They will show a child something that is too expensive to buy this week, for example, and explain that they could save up for it and buy it the following week.”

The unique environment at Gateway also allowed the friendship to form and thrive. S. and C. are confident, friendly young men on the brink of adulthood that will likely be filled with true friendship and self-acceptance because of the groundwork laid by parents, friends, family and their school community during these crucial years.