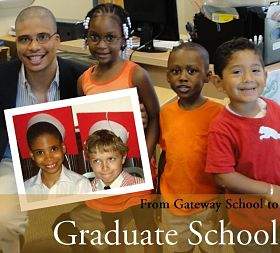 A graduate student at Coppin State University, N.J. has a myriad of interests and loves to talk about his studies, his pastimes and his life. Meeting him today, it’s hard to believe that he didn’t speak a word until he was 4 years old.

N.’s mom, B., knew that N. was having trouble communicating and sought answers from every expert she could find. He had his hearing tested; it was fine. Some doctors thought he was autistic; he wasn’t. He exhibited no other apparent developmental delay; he simply didn’t speak. Eventually, B. and N. were referred to HASA for speech-language therapy. His first word, at the age of 4, was kaleidoscope. B. says, “Once he started talking, he never stopped.”

At the age of 7, he enrolled in Gateway School. Gateway’s small classrooms and individualized approach to learning were exactly what N. needed. He stayed for three years and made lifelong friendships with his classmates. According to N., “It opened the door to everything.”

When N. was 9, it was time for him to move on to public elementary school. There was a period of adjustment. He was put in special education classes that were not the right fit for him. His curiosity helped to get him through the tough times. N. and some of his Gateway classmates joined the same Boy Scout troop, which helped them stay in touch and feel connected to the school that they loved so dearly.

N. made it through middle school and high school, but he was shy. He didn’t read well and he didn’t quite fit in. He has an almost photographic memory — he remembers everything that he learns, but he has difficulty reading long strings of text. The advent of the Internet and the popularity of documentary films and YouTube videos changed the way N. sought information. He began to read about history online and watched educational videos voraciously.

When N. went on to college, it wasn’t always easy, but he made it, earning his Bachelor of Science degree in History from Coppin State University. He’s currently in a Criminal Justice graduate program. To converse with N., is to talk to a young man who has a zest for life and a passion for learning. He has a bright future ahead of him. If his time at Gateway School is any indication, he’ll be immensely successful.