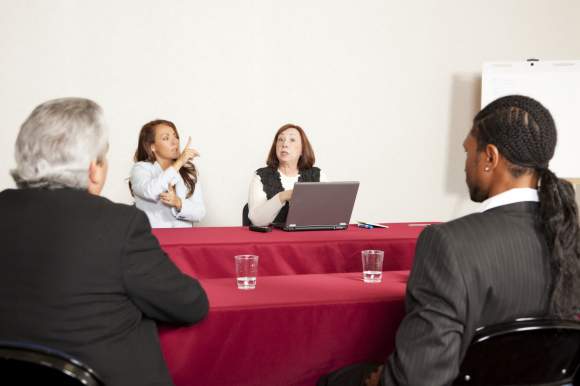 A.P. grew up a “military brat.” She had never met a deaf person or sign language user when she was a child. As a teenager, she became fascinated with American Sign Language, but only ever saw it in books or on the occasional television show. Moving around the world and experiencing life in other countries led to an interest in culture and language for A. “I always loved languages and studied several of them over the years,” she says. “I was reasonably fluent in German and also studied Russian, Spanish, and Cherokee. But American Sign Language (ASL) was the most intriguing language I had ever encountered.”

A. went to college to study nuclear medicine, but wasn’t really that interested in it as a career, despite her love of science. As her enthusiasm for medicine waned, her grades dropped. Her father had noticed the problem and secretly did some research. He mentioned that there was a career using sign language and a college much closer to home that had a degree program in sign language interpretation. “Any self-respecting daughter can’t just go all in for what her father suggests,” explains P., “so I said I would take one class to give it a try and see. And, I loved it. ASL was the best language I had ever studied. It was not the easiest — the grammar is quite unique — but it was definitely the most fun.”

As a sign-language interpreter, A. says she appreciates the small things she can accomplish, such as making everyday communication simpler and clearer (imparting subtle meaning often lost through common means of communication like email or writing or instant messaging). She often works in legal settings or during business transactions “where,” she explains “my clients would be at a serious disadvantage if they didn’t have a way to communicate information or get their questions answered.”

“Once,” says A., “I worked in a hospital setting for an adult whose hearing parents never learned to sign. There hadn’t been communication between the young man and his parents for years. As the interpreter, I helped facilitate communication between members of a family that had been estranged in part because they didn’t have access to someone with my skills.”

“I am utterly grateful to have such wonderful employment,” continues A. “I meet fabulous people on a daily basis. I have learned a beautiful and unique language, and I am even able to do a good deal of interpreting work in science-related settings to satisfy that interest as well. As an interpreter, I always have a new challenge to tackle and I love that permanent learning curve. I feel grateful for the insight I’ve gained into Deaf Culture and honored to have been welcomed into the Deaf World.”