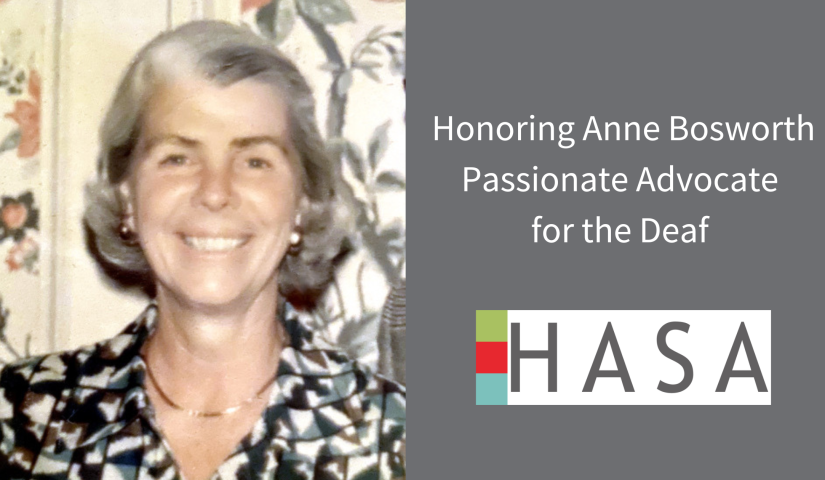 Anne Bosworth (1925-2022) is remembered as an unwavering advocate for those in her life. After supporting her deaf mother, Anne expanded her impact by championing the Baltimore deaf community at HASA. Read on to learn more about her life and story.

In the heart of the Rocky Mountains in rural Wyoming, Peter and Frank Bosworth walked on the muddy road behind their family car. Their mother, Anne Bosworth, navigated the vehicle through the precarious pass. With a cliff on one side and the unforgiving face of the Rockies on the other, Anne was unsure if the car would make it without sliding over the cliff. So she had her boys walk behind the car for the half-mile stretch.

The family made it through this narrow pass, and today Peter tells the story about his mom with a smile. This was typical Anne, he says. It was her “dogged determination.” She strived to not only overcome a situation but to find the best possible outcome that defined her life. She was undaunted by difficulty. And found inspiration in overcoming the unknown.

She brought that spirit to everything she did. Anne particularly enjoyed researching stocks. She would research a particular stock for days and then call her broker and ask him to buy the shares. When he would push back, she would have irrefutable research to prove him wrong. For a woman born in 1925, this fierce independence made Anne a force to be reckoned with.

But her biggest legacy lies in the impact she had on the lives of those around her. Anne was a loving and devoted caretaker to her son with Autism Spectrum Disorder (ASD) and her mother, who was born deaf.

Anne assumed the role of caretaker earlier than most. Ever since Anne left for college, she played the role of a parent more than a child for her mother, Marguerite Munger Abernathy.

Born in the late 1800s, Marguerite was born deaf in Ft Worth, Texas. But instead of institutionalizing her, which would have been common practice, her family sent Marguerite to Clarke School for the deaf and hard of hearing. There, she learned how to lip read, a key for integrating into the hearing world at the turn of the century.

Even with the best resources available, Anne grew up with a mother still considered on the margins of society. And Anne’s life from the time she was young was spent helping her mother with her basic needs and navigating the day-to-day in a world built for the hearing. Anne parlayed this experience into passionate advocacy.

While Anne’s advocacy for the deaf and hard of hearing is most defined by the role she played in her own mother’s life, she continued her work by giving back to HASA both by donating her time and resources.

Today, Anne’s legacy lives on— in her own family, sons, and grandchildren. And it lives on in HASA’s work as well. Her son, Peter, now serves on HASA’s President’s Advisory Council, and Anne’s gifts continue to help to transform the lives of those in Baltimore’s deaf community.

Anne’s story was part of our HASA 2022 Annual Report. Click here to view the full report.